The controversy regarding the benefits versus the downsides of “fracking” (the use of hydraulic fracturing combined with horizontal drilling to release large quantities of natural gas and some oil from vast shale formations) will not be resolved any time soon.  What is  clear is that the U.S. is now known to have a huge, hitherto untapped but now recoverable source of relatively inexpensive natural gas. Availability of this resource will allow us to back out significant amounts of foreign crude oil as gas is increasingly used for power generation and in the transportation sector. Moreover, the installation of thousands of new wells and the associated infrastructure is creating many thousands of new jobs, mostly in depressed areas of the country.

But it is also clear that in many locations where fracking is used, inhabitants find methane in their drinking water and chemicals from the fracking process in groundwater, some of which may have leaked from storage ponds used for the recovered water from drilling. Some of the chemicals are not associated with those used in the fracking process, but are leached from the formation itself, as the  process disturbs mineral-loaded land subject to the high pressures used in fracturing the shale.

A good article on drinking water problems related to hydraulic fracturing of shale deposits can be found in Scientific American’s November 2011 issue. 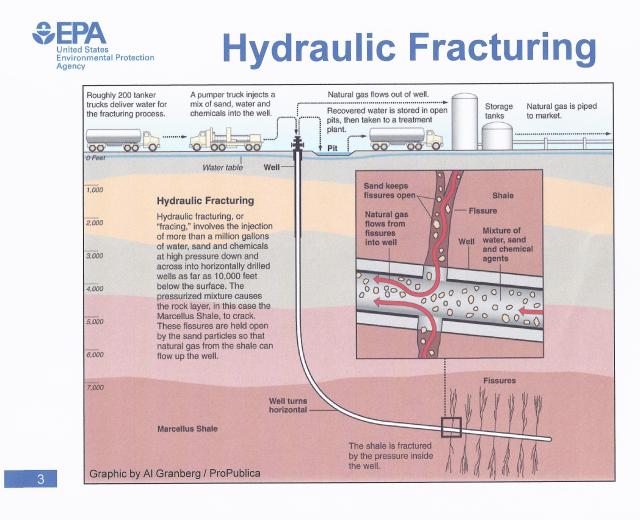 Companies involved in fracking for natural gas claim that the process is inherently safe in terms of drinking water contamination, as long as proper procedures are used. Faulty cementing and casing failures are considered to be the main “weak link” in the fracking process. This is because the flowback water from fracking could then leak into water deposits at a higher point in the well causing ground water contamination. It is believed that cementing of wells can never be completely foolproof- that failures will always occur in some wells.

The EPA has launched a major study to analyze how shale fracking is or may be tied to drinking water contamination. This will include test well failures and existing subsurface pathway scenarios. An interim report will be published next year.

An excellent, recent article in the Wall Street Journal discusses how the potential hazards of fracking are the subject of studies being undertaken to establish appropriate standards. These will be carried out urgently against the background of this country’s need for greater energy independence, with greatly increased use of natural gas,  balanced against the problems caused by the use of, at times, faulty fracking procedures. Considering the facts, it seems unlikely that the problem of drinking water contamination can be completely solved, given the huge number of wells being drilled. But it would also seem that enforcement of proper procedures should minimize the problem.  At this point, each state must decide how to make that cost/benefit balance, based on rule making and the results of additional studies.

This entry was posted in Chemical Industry, Energy Industry and tagged petroleum. Bookmark the permalink.

4 Responses to Fracking: Rewards and risks