Our government spends a lot of money to encourage the private sector to invest in alternative energy projects. This includes research and development (R&D) investments as well as market incentives, such as grants, subsidies and tax credits. The former is largely carried out by the Department of Energy(DOE) and the Department of Agriculture(USDA). Legislation focusses on the market incentives, which dwarf the amounts of money the government spends on R&D. You could argue whether the government has this proportion right, but there is reasonable progress regardless.

R&D funding is intended to drive innovation in renewable energy by both the public and private sector, with investment contributing both to energy independence and decreasing damage to the environment. To this end, the DOE some years ago established “milestones” for a number of renewable energies:

Cellulosic ethanol: Competitive with corn-based ethanol by 2012; Solar: Grid parity in all U.S. markets by 2015: Wind: Reduce cost of energy from large systems to $ 0.03/kwh by 2016; Hydrogen: Fuel cell vehicles in the showroom and hydrogen at fuel stations by 2020.

These milestones are now seen to have been quite unrealistic. 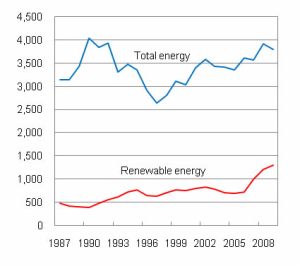 Nevertheless, they have spurred Federal R&D expenditures as noted on the graph. By 2008, the total amount of Federal R&D funds devoted to these technologies amounted to about 1.25  billion dollars.

The Obama administration stepped up this effort, though not as lavishly as some might think. In the biomass area, Federal R&D funds increase about 25% between 2008 and 2010.

Federal subsidies are quite a different story.  The clean energy incentives established as part of the $ 800 billion stimulus bill created a boom in alternative energy projects that led to massive investments in solar and wind energy by a number of companies that were often guaranteed highly profitable operations. The DOE loan guarantee program and the TreasuryDepartment’s grant program led to $ 14.7 billion in subsidies, while incentives provided by states  included major tax breaks and highly favorable long term power-puchase contracts.  A mandate that California utilities buy 33% of their power from clean energy sources by 2020 led to a very lucrative 25-year contract that NRG Energy signed with Pacific Gas & Electric company. A Canadian firm, Brookfield Assts Management, will receive massive subsidies for a New Hampshire wind farm that are worth half or more of the $ 229 miilion price for the project. GE has or will receive up to $ 3 billion in Federal grants and loan guarantees for solar and wind projects.

Unquestionably, the Obama administration has spent a lot of taxpayer monay to advance its alternative energy goals, though the programs started being funded under Bush.  The use of “milestones” as listed above seems counter-productive to me as they were unrealistic from the get-go. But perhaps they serve a useful purpose as targets even when the dates may be missed by quite a margin. Whether the various subsidies and loan guarantees were too favorable to investors is, however, a reasonable thing to ask.