Controversy will continue because of continuing incidents where “fracking” has introduced chemicals and natural gas directly or indirectly into household drinking water. This situation must and will be dealt with by regulatory authorities, but we must nevertheless be steadfast in developing the resource– in a safe way. Agencies must decide where drilling can occur, what safeguards must be taken and how waste water is disposed of. And they must act as watchdogs, threatening large fines to keep irresponsible drillers from despoiling landscapes at drilling sites.

This must be the inevitable outcome, resulting in safe and environmentally acceptable conditions for producing this incredibly valuable resource. It is now estimated that shale gas will account for 60 percent of U.S. natural gas production by 2035(!). With cheap, abundant natural gas available for many decades, the U.S. is now highly 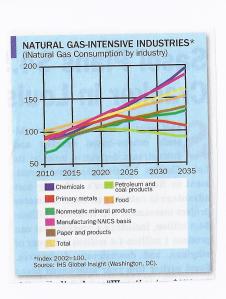 competitive on a global basis for the production of chemicals and also of other products made by natural gas-intensive industries.   The impact of shale gas production, starting in fairly large quantities four years ago, has given U.S petrochemicals producers a very large advantage over competitors in Europe and Japan.  The importance of natural gas and gas liquids (ethane, propane, butanes)  is emphasized by the fact that in 2010 these hydrocarbons accounted for 66% of petrochemical feedstocks, according to the American Chemistry Council’s annual Guide to the Business of Chemistry 2011. Natural gas also provided over 50% of fuel and power consumption for U.S. petrochemicals producers. In Europe and and even more in Japan, a much larger percentage of both feedstocks, fuel and power consumption come from oil.

In addition to greatly improving American petrochemicals manufacturers’ position to export ethylene and propylene derivatives (primarily polyethylene, polypropylene, ethylene glycol, etc), the favorable natural gas pricing is also reviving the domestic manufacture of ammonia and methanol, which have been imported in large quantities for a number of years. Further, the low power costs on the Gulf Coast have given an estimated $ 150/ton cost advantage to U.S. chlor-alkali producers over their European competitors, leading to lower caustic and chlorine production costs.