In developing my TED talk on chemical engineers and on the innovations now being made in the use of biomass feedstocks, I started to think about the changes that have been taking place over a number of decades in raw materials for plastics and synthetic fibers. I think this is a really interesting story. 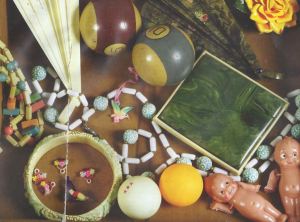 based phenol and from formaldehyde were  commercialized in the 1920s and used  to make a variety of molded products, notably dishware, telephone headsets, etc. Cellulose was also used to produce man-made fibers (e.g. rayon, cellulose acetate). Cellulose acetate, which is a thermoplastic resin made from cellulose and acetic anhydride, achieved limited use in screwdriver handles and other such clear (not opaque)objects and in films and fibers. A third raw material, fermentation alcohol, was converted to a number of chemicals, principally other oxygenates, but also ethylene, butadiene, etc. in limited quantities. All of this was before World War II and none of these chemical derivatives were deliberately based on hydrocarbon (i.e. crude oil or natural gas-based )feedstocks, though refinery operations did yield some olefins as byproducts of cracking operations.

The need for a host of war materials in very large quantities became a critical national priority and saw chemical engineers taking the lead in the rapid commercialization of a number of hydrocarbon-based polymers as well as high octane gasolines for fighter planes.  I mention the latter because a great deal of innovation in catalysis had been taking place in the 1920s and 1930s, which allowed mass production of BTX aromatics and branched chain octanes in plants erected in a very short time frame. (Isooctane and

cumene were needed to give a rapid boost to planes taking off from carriers and small air fields and for enhanced maneuverability in aerial “dog fights”).

Getting back to polymers, the reactions to produce the major thermoplastics we know today ( notably polyethylene, PVC, polystyrene) had recently been discovered (though German chemists were ahead of us in chain polymerization) but these products had not yet or barely been commercialized. Intensive development showed that polyethylene was ideally suited for radar shielding, plasticized PVC could be used to make tents and other sheetings and coverings, and styrene became a critical raw material for synthetic (SBR) rubber production after the Japanese occupied Malaysia, the major rubber exporting country, in 1942. Over an amazingly short period between  1940 and 1945, the U.S. and Canada built a large number of plants to make these “war materials”. The “building blocks” for these petrochemicals were largely ethylene, propylene, butylenes and benzene produced largely in refineries, but also in “steam crackers” based on natural gas-derived ethane, higher alkanes and naphtha.

And when the war was over the wartime factories could easily be switched or converted to make petrochemical products for a huge American consumer market that had lived through the Depression and the deprivations of wartime, but was now ready for a post-war boom. The new petrochemicals, including synthetic fibers (nylon, polyester, acrylic) also developed just before and during the war, were well suited for use in housing, automobiles and a variety of consumer products, given the versatility of thermoplastics, which could be injection molded, thermoformed, blow molded and compounded in diffferent ways to make thousands of products not known before the war.

And petrochemicals quickly replaced the chemicals and polymers made from cellulose and coke oven chemicals as larger and larger plants achieved economies of scale that could not be matched by production from the earlier feedstocks, a time that also saw polluting coke ovens shut down as steel production methods changed. From that time until today, hydrocarbon feedstocks have accounted for essentially all of worldwide polymer production.

Currently, there is much activity in making some of these “petrochemicals” from renewable feedstocks, principally starches and sugars as well as other biomass sources. Projections imply that production from renewables will reach a number of billions of pounds over the next decade or two. So, history continues.

This entry was posted in Chemical Industry and tagged Alternative chemical feedstocks. Bookmark the permalink.