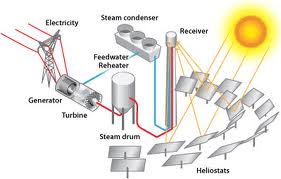 The use of photovoltaic solar cells for residential and commercial use has been increasing rapidly as the cost of these cells has dramatically come down. Still, solar energy still accounts for only about one percent of U.S. energy demand. Recently, the first three large plants using solar power for electricity generation have started up in California and Arizona. These plants generate, respectively, 250, 280 and 392 megawatts, figures that compare favorably in scale to many of the smaller coal-fired power plants still in operation. Two of these units, the Abengoa Solar Solana and the Ivanpah plants use concentrated solar power (with thousands of mirrors reflecting sunlight on towers or pipes containing a circulating fluid that then generates high pressure steam to drive turbines) while the California Valley Solar Ranch uses photovoltaic panel-tracking devices, as described in the December 18th issue of Chemical & Engineering News. (See also my post dated January 13, 2012)

Construction of these plants was greatly facilitated by a variety of Federal and State incentives for renewable energy generation, with California’s mandate that 33% of its electricity be supplied by renewable sources by 2020 as background. The Department of Energy originally provided a billion dollars in loan guarantees and a 30% investment tax credit for solar installations. Another 10.5 billion dollars in Federal loan guarantees has led to the funding of eight other relatively large solar utility projects generating another 1900 MW. At this time, close to 80% the solar power plants under construction are based on the photovoltaic technology. This is interesting, because concentrated solar power allows storage of circulating fluid heated during the day and used to generate electricity at night, thus providing power for up to six hours without sunlight. The Abengoa Solana plant includes this feature.

The rush into solar power plants must be weighed against environmental siting problems in these desert locations, including very costly relocation of turtles and large populations of kit foxes suffering from a canine virus. Also, Federal and State tax incentives are set to expire over the next years. One bright sign is that a Colorado utility has contracted to purchase 170MW of solar electricity without federal or state incentives, perhaps signalling that solar power is becoming competitive.