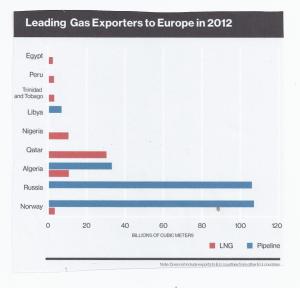 The  crisis in Ukraine,  a Putin power play, is significantly supported by Russia’s  position as a very large supplier of natural gas to Western Europe. The main Gazprom supply lines  transport around 400 million cubic meters per day to a number of countries highly dependent on this energy source. While Norway supplies gas to the northern tier countries, Germany is also heavily dependent on Russian gas. If the Western powers threaten more serious sanctions, that country can retaliate by cutting off the gas. 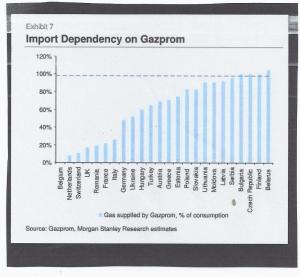 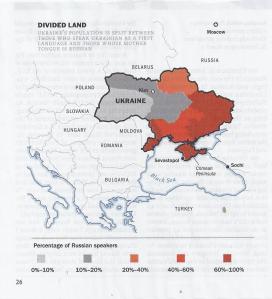 Therefore, Putin believes he is in a strong position to hold the Western European countries and NATO in check, threatening to take over the Russian-speaking parts of Ukraine, while holding his European customers hostage to Russian gas supply. (See graphics, taken from a recent Time Magazine article).

An obvious move would be to reduce Europe’s dependence on Russian gas, though any move in this direction would take a long time and is therefore useless as a tool to defuse the crisis. If it were to be considered even as a long range strategy, here are some facts.

Gazprom sends around 400 MM cubic meters per day of natural gas to its customers, mostly in Europe. Let’s assume that some of this gas could be replaced with gas from new LNG tankers (the current tankers are in use supplying existing customers). There would also have to be some new LNG offloading facilities hooked up to some existing and some new pipelines. A typical large LNG tanker hold 3 billion cubic feet of gas. By my  calculations, each tanker load of LNG could replace about 20 percent of Gazprom’s daily shipments. In other words, a fleet of perhaps 30 new LNG tankers going back and forth between Qatar, America and other potential suppliers would be required to land one tanker a day in Europe to reduce Europe’s dependence of Russian gas by only twenty percent. This would also require construction of several new LNG liquefaction facilities, such as that being built by Cheniere Energy Company in Louisiana, which will send shale gas-based LNG to Europe. 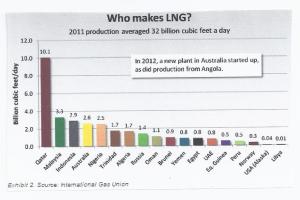 For additional perspective, total world LNG production in 2011 amounted to 32 billion cubic feet per day. This is equivalent to ten LNG tankers supplying the entire world in that year, versus twenty new LNG tankers to take the place of 20 percent of Russian gas to Europe. It would make more sense to greatly expand shipment of Norwegian gas via existing or new pipelines. I haven’t heard any speculation about that, but any Western ideas about breaking Russia’s monopoly on natural gas to Europe is an idle threat. The NYTimes article this morning corroborates this unfortunate fact.

This entry was posted in Energy Industry and tagged natural gas. Bookmark the permalink.