GW/Climate Change: Why methane is so important 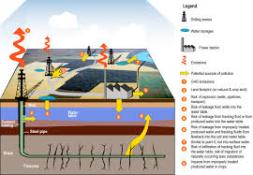 For some time now, it has become obvious that natural gas and crude oil production from shale deposits results in significant emissions of methane, a much more potent greenhouse gas than carbon dioxide. Efforts by drillers and gas distributors to reduce the amount of leakage during production, processing, transmission and distribution are being undertaken, as well as regulatory actions. But the problem will be difficult to solve. It is of interest to note that the recent report “Pathways to Deep Decarbonization” issued by the Sustainable Development Solutions Network does not even consider the methane “problem”, focussing entirely on carbon dioxide abatement or capture and changes in energy sources supply (major switch to renewables) and lifestyle changes. So, it is important to put this matter in perspective.

Because of its structural characteristics in terms molecular bonds, methane has a much greater global warming potential (GWP)than carbon dioxide, though its effects last over much less time. A recent article in Chemical and Engineering News the 20-year GWP of methane is 86 times greater than the GWP of CO2. (That figure shrinks rapidly as time progresses.)  This is significant because scientists, including those conducting the Decarbonization study, believe it is essential to limit the increase in mean global surface temperature from rising more than 2 degrees Centigrade, with even that much increase posing a threat to human wellbeing. Their calculations and others (e.g. the Potsdam Institute for Climate Impact Research) project an increase of 2.5 to 7.8 degrees C by the end of the century if nothing is done to limit GHG emissions.

This puts the spotlight directly on methane, because the short term harmful effects of methane emissions may be more important than those of carbon dioxide. Still, there is a great controversy as to how much methane is actually being emitted or burned to carbon dioxide as a result of oil and gas drilling and natural gas transportation and distribution. Current estimates vary from 1-2% of natural gas production (EPA estimate) to as high as 6-12%, based on samples taken from aircraft over natural gas fields. At the higher levels, using natural gas instead of coal would result in a more harmful GHG situation! And the picture is made worse by the fact that in some areas (e.g.the Bakken field) where only oil is produced, the associated gas is burned and flared. Also, since natural gas is now relatively cheap, there is less incentive for drillers to reduce gas leakage at the well (short of tighter regulations). And then there are the hundreds of thousands of old, existing wells many of which still emit methane. Still, if the EPA’s estimates of methane leakage are in the right ballpark, this source of methane emissions still ranks below that of worldwide emissions from livestock(!).

All of this does not even consider the release of methane from Arctic permafrost and methane hydrates in the ocean waters as global warming proceeds.

Methane concentrations in the atmosphere  started rising sharply around 1900 and have more than doubled since that time. From all of the above, it can certainly be argued that both methane and CO2 must be considered if serious steps are to be taken to limit global temperature rise, with methane apparently a more serious short term problem, but one that can be tackled more easily by reducing leakage. There is a tremendous economic incentive, as well. A leakage of even 1.2% of production is worth about $2 billion in lost revenue.

I am particularly interested in readers’ comments on this issue.