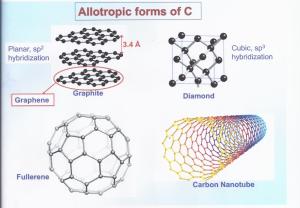 Richard Smalley’s team’s discovery of Buckyballs( Fullerene) at Rice University in 1985 was a breakthrough in the knowledge of so-called allotropic forms of carbon. Thirty years have now gone by, but commercial applications of these interesting shapes of carbon are still hard to find. Not so for carbon nanotubes, a cylindrical form of fullerenes and for graphene, arguably the most important form of allotropic carbon other than diamonds.

Carbon nanotubes are cylinders of one or more layers of graphene. This is an extreme thin transparent sheet of carbon which is 100 times stronger than steel and an excellent conductor of heat and electricity, first produced in 2004. Graphene is a honeycomb lattice of carbon atoms.

Because of its atomic structure, graphene is the most reactive form of carbon.  It generally needs to be bonded to another material (nickel, copper, iridium) to make it usable. Graphene is a superb conductor of electricity, supporting current densities 1,000,000 times that of copper.  Graphene’s large surface area and other properties make it an ideal candidate for manufacture of medical devices, electronics, ultrafiltration, structural materials, battery energy systems and photovoltaics (displays). Batteries, in particular, could benefit hugely if certain problems can be overcome: Graphene-based batteries could be charged much faster than current lithium ion batteries (minutes instead of hours) and with greater storage capacities.While the current market for graphene uses is only around $9 million, estimates of billions of dollars have been forecast if graphene’s promise for electronics and batteries is realized (!).

Carbon nanotubes, which have been exploited for some time now, are used as electrically conductive fillers in plastics, for various painting applications in automobiles, in composite wind turbine blades, in inks, as a filtering medium (e.g. for desalination plants), in anti-fouling paints for boats, as transparent conductors and in anti-ballistic vests. With similar but enhanced properties as carbon fiber, carbon nanotubes are now used in composites for bicycle bodies and tennis rackets.Current world capacity for carbon nanotube applications reached five thousand tons in 2011. But graphene is considered a much greater technological breakthrough, in part based on the much larger number of graphene patents issued.

Graphene-based storage of electricity could be the “holy grail”. Previous posts on this blog have discussed the growing need and use of different types of electricity storage to smooth out the intermittent production of power by wind and solar energy. Could graphene provide a useful answer?

This entry was posted in Chemical Industry and tagged material chemistry, nanotechnology. Bookmark the permalink.