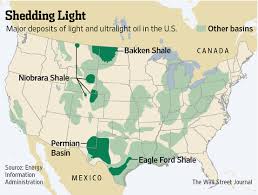 My October 19th post on crude oil pricing outlined the basics behind crude oil supply-demand pricing and pointed to a likely “floor” price around $60 per barrel, largely based on the fact that around this price the more expensive crude oil sources (deep offshore, tar sands, fracking) are no longer profitable and start to decline. It is now obvious that the analysis was off the mark as domestic crude oil is now $50 or less, yet supply keeps on coming.

A very interesting article by blogger Andy Weissman (Energy metro desk) sheds light on this issue, with lots of facts to back up his interpretation. The main reason for the dramatic and still continuing drop in crude oil prices is based on the fact that for this commodity small imbalances create major change and it takes time for classical supply-demand factors for the price to reach equilibrium. Major volatility is caused by the fact that supply sources keep pumping while demand is relatively inelastic over the short term, rather than increasing in response to lower prices at the pump.  This is nicely illustrated in the graphic for the 2008-2009 period. 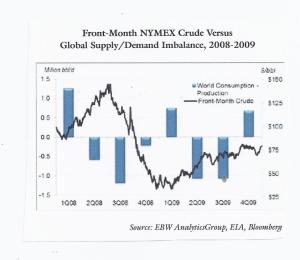 In 2008 a supply deficit of around 1MM bbls/day drove the price from $90/bbl. to almost $ 150/bbl. in 6 months! Less than a year later, the severe financial recession caused a supply glut of the same amount and crude prices plunged to $ 34/bbl!

Weissman described the “tipping point” triggering the crash in crude oil price as resulting from these developments: (a) weakening global demand, (b) Accelerating growth in U.S. production (During the last four months of 2014 production, mainly from shale, has been rising at a rate of $ 100,000 bbl./day per month, (c) Libya, Iraq and Canada recently adding production (d) U.S. refineries reaching capacity for running light crude (mostly produced from shale) and therefore no longer able to process incremental crude to gasoline and diesel destined for exports  (e) continuing ban on U.S. crude oil exports. and (e) OPEC at its recent meeting deciding not to cut member production quotas, a stratagem that traditionally was used to match supply and demand. All this means that new production literally “has no place to go”.

It is now known that producers using hydraulic fracturing and horizontal drilling are moving nicely down the “experience curve”, reducing production costs in different ways, including much greater amounts of proppants(i.e. fracturing sand), which can increase production by as much as 30%. This technique, just starting to be widely used, in combination with working on the potentially most prolific wells, will continue to enhance monthly production rates. Major producers are now talking about breakeven costs in the range of   $ 40-45/bbl.

No doubt, crude oil price will rise again, most likely to the $ 60-70 level as a number of the factors mentioned above rebalance themselves. Since U.S. companies have no incentive to reduce production if their costs are acceptable, OPEC will have to accept lower production volumes while world demand increases with attractive gasoline and diesel prices. To restate the general premise, the laws of supply and demand will always come up with an equilibrium price. For oil and some other commodities, it just takes a little time to get there.

This entry was posted in Energy Industry and tagged fracking, petroleum. Bookmark the permalink.