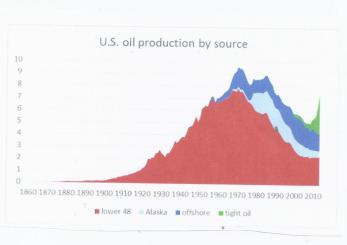 This update to my recent post provides more background on the costs of producing crude oil from different fields in different ways and, together with the visual below, is useful in trying to assess where the “equilibrium” crude oil price might be found. That point, according to theory, would be the cost of the “marginal producer” of shale-based crude, who is not the lowest cost producer but the producer who just stays in business at the equilibrium price that meets supply and demand. Unfortunately, this is not an exact science and is complicated in this case by complex factors such as contracts, driller debt payments, etc.

These graphs were taken from an article in Vox dated December 3, 2014. Note the green colored area, which show the rapid rise of shale-based crude, whose production rose 3.6 million barrels per day between 2008 and 2014. Other land-based domestic (except Alaska) crude oil production is shown in red, which peaked in the 1970s and then declined rapidly, Alaskan production in pale blue, and offshore production in deep blue. The other graph shows various representative production costs of different sources of U.S. and Canadian crude oil.

While this cost curve gives the impression that each bar on the graph gives a good indication of the production cost in each of the different regions, that is actually only a “typical” cost. Actually, in the Bakken field, there are thousands of wells and their production costs vary from $40 to over $ 70 per barrel, depending on the shale formation and depth, the fracking technique employed and the age of the well. So each bar represents the kind of average production cost for shale and other crudes. Not shown in the graph is offshore oil which in my October 19th post was estimated at $ 50-60 per barrel for cost plus return on investment.

All this makes it vary hard to come up with a good answer to the question that is currently plaguing investors and crude oil producers alike as they see the price continuing to drop. Unfortunately, there is absolutely no consensus on this point. Crude oil, gasoline and diesel inventories are extremely high right now and, as my previous post points out, additional crude has no place to go. Some Bakken crude is being sold at $ 30 per barrel just to move it! It does appear that corrective moves to cut drilling and cancel new investments are starting to take place. Some oil companies are considering a cut in dividends. It seems reasonable to think that crude oil price will balance out around $ 50-60.

This entry was posted in Uncategorized. Bookmark the permalink.