U.S. Oil Self-sufficiency: Not all it’s “fracked” up to be 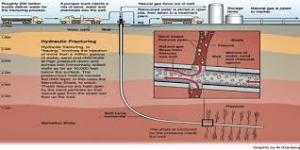 The recent( $30-45 per barrel) price range of crude oil is likely to last for quite some time if prognosticators are to be believed. This is partly because Iranian oil has come on the market and the Saudis show no sign of giving up market share to their sworn enemy. But it is also because it is now clear that hydraulic fracking of shale for crude oil is uneconomical for most operators  at these price levels, a situation which has already reduced U.S. oil output by about a million barrels a day , with many rigs shutting down. For those who projected the U.S. to become the world’s “swing producer” controlling the price of oil the way OPEC has been doing for a number of decades, it has now become clear that this could only occur if oil prices get back to the        $ 70-80 per barrel range or higher and if Saudi production starts to decline with aging wells. Then, the potentially unlimited amount of U.S. shale-based crude oil – given the country’s prolific shale deposits – could put the U.S. into the driver’s seat. But there is no reason for oil prices to reach a sustained level substantially above the current range unless or until world demand reaches a considerably higher level and other supply sourced start to decline.

Furthermore,  it seems that hydraulic fracturing of shale may not be the panacea that its advocates have promoted ever since the technology started to be widely employed ten years ago. While local opposition to fracking due to ground water contamination, poor remediation practices and noise was more anecdotal than widespread,  bad publicity was prominent and some states, notably New York, have banned fracking altogether. Leakage of gas into the atmosphere during the fracking operation has received increasing attention as methane is a worse Greenhouse gas than carbon dioxide, though strict regulations have been enacted to deal with this problem. Still, the growing move to reduce carbon emissions from all fuel burning (industrial and automotive) has spawned increasing negativism toward fracking as a technology since it facilitates the continued use of hydrocarbon fuels versus renewable energies and has even become an issue in the presidential campaign.

And now the opponents have a new tool to aim at the fracking industry: the very rapid growth of low level earthquakes in Oklahoma, Texas and California. 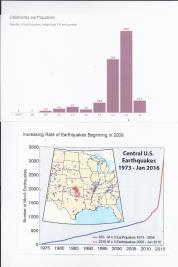 As these graphics show, the number of generally Level 3 and  greater earthquakes in Oklahoma has dramatically risen in the last several years, parallel to the rapid increase in hydraulic shale cracking in that state. Studies at Southern Methodist and University of Texas have shown that the disposal of spent fracking water by pumping into wells thousands of feet down has, in such cases caused earth faults to slip, resulting in small earthquakes. Disposal and injection wells have actually been known to induce seismic activity since the 1960s, but in mostly rare cases. Now there has been good correlation between fracking water disposal wells and earthquake activity in locations like the DFW Airport. The U.S. Geological Survey has said that they can turn earthquakes on and off by injecting liquid into the ground.

What we can say is this:  Hydraulic fracking of shale with horizontal drilling in the U.S. would be an almost unlimited technology to produce crude oil at prices in the $60-100 per barrel range at some point in the future. However, price uncertainty and growing domestic opposition to fracking make this a theoretical option at this time.

This entry was posted in Energy Industry and tagged fracking, petroleum. Bookmark the permalink.