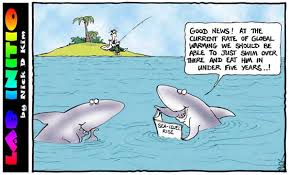 Continuing from my last post, I want to bring readers up to date on what many scientists now project for increases in global sea level rises caused by Greenhouse Gas emissions. Before getting to Antarctica, let’s look at the latest EPA projections on atmospheric CO2 levels. Starting at 400 parts per million(ppm) in 200, CO2 levels would rise to 1300ppm(!) by 2100 at current emission levels or, more likely to 600-800ppm as countries take steps to reduce carbon burning. The corresponding rises in average U.S. temperature  vary from 12 degrees F to 3 degrees, the latter figure corresponding to a dramatic future reduction in carbon emissions.

Sea level rise comes from two sources, (a) melting of Arctic, Greenland and other ice and (b) warming and consequent expansion of the sea water. Between 1870 and now, the sea level has risen about 7.5 inches. The EPA study projects levels to rise between 1 and 4 feet (depending on scenarios) by 2100. The base case shows New York City levels to rise by 2.3 feet and Galveston, Texas by 3.5 feet. Other studies give relatively comparable projections. What climate change “deniers” point out is that you have to accept these exponential (not linear) projections of the effect of CO2 accumulation in the atmosphere.

A new study of Antarctican ice has come up with a hypothesis that would accelerate the melting of the huge ice sheet there. Observations of Greenland’s glaciers have shown destabilizations termed “hydrofracture” in which water formed by the melting of snow and ice on top of a glacier causes it to break up and collapse. If this were to occur in Antarctica, massive ice sheets would crash into the sea when cliffs 100 meters or more above sea level become unstable and collapse.

Over the years of Earth’s history, there were two warm eras where seas were much higher than they are now. In the Pliocene period, about 3 million years ago, the atmospheric CO2 level was about where it is right now and sea levels were about 30 feet higher(!). In the Eemian period, about 120,000 years ago,  sea levels were 20 to 30 feet higher and global temperature about where it is now. Interestingly, if the entire Antarctica ice sheet were to melt, seas would rise about 50 feet.

So, these are some numbers to ponder, particularly if you live in a coastal areas and look out at the sea.

This entry was posted in Energy Industry and tagged Climate Change. Bookmark the permalink.